Windows Server powers many of the worlds' largest datacentres, enables small businesses around the world, and delivers value to organisations of all sizes in between. Building on this legacy, Windows Server 2012 redefines the category, delivering hundreds of new features and enhancements spanning virtualization, networking, storage, user experience, cloud computing, automation, and more.

Simply put, Windows Server 2012 helps you transform your IT operations to reduce costs and deliver a whole new level of business value.

Both Standard and Datacentre editions provide the same set of features; the only thing that differentiates the editions is the number of Virtual Machines (VMs). 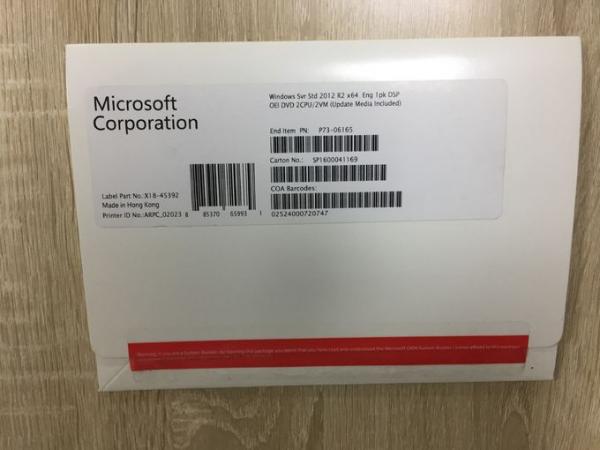 Haifu software Trading Company Limited is an award-winning supplier of Microsoft software, We are a professional software trading company, providing software solutions for many companies around the world!

We exist to make tech accessible by helping people (like you) choose the perfect product, get a great deal, and install it easily – so you can enjoy your software immediately.

We have everything you need for your computer - from Windows operating systems, Microsoft Office Suites, Office applications, as well as Internet security and anti-virus software. We understand fully that ensuring your computer system runs smoothly and securely should be given top priority without compromising your budget, because we expect nothing less for ourselves.

if you’re looking for genuine Microsoft software at the cheapest price,great technical support and advice ，Our products will be your best choice!

Send your message to this supplier
You May Like
Find Similar Products By Category:
Other Computer Products
Inquiry Cart 0
Contact Us
Inquiry Cart
Back To Top