Server Virtualization: With Hyper-V in Windows Server 2012, it is easier than ever for organizations to gain cost savings from virtualization

Identity and Security: Windows Server 2012 makes it easier for administrators to configure, manage, and monitor users, resources, and devices to ensure proper security and access

Storage and Availability: Windows Server 2012 can help you manage the balance between delivering capacity on demand while managing operational overhead and controlling capital expenditures

Server 2012 R2 Standard (2CPU/2VM) is the best you can get currently depending of course on your purpose for the OS. Installation was a breeze and insanely faster than prior MSoft Server OS's. It's lightweight (for Windows) until you load up all the server roles you may need, but the whole point of this license is to allow you to keep the OS's light weigh by Virtualizing other machines and having the jobs spread out! 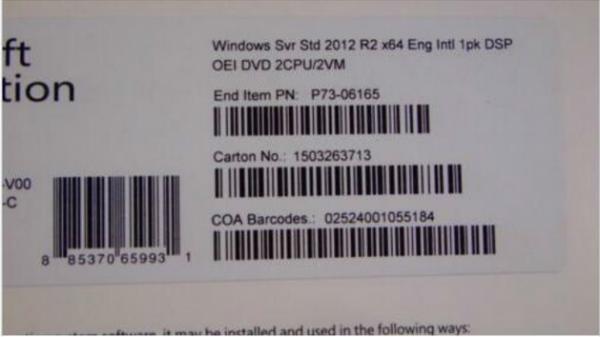 and software solutions to support or cooperate with our customers’ projects, such as successful for winodws,office,server and adobe. We have partnership with many global companies. Besides that, Minko is also software manufactory.

- R&D for software and software solution

Send your message to this supplier
You May Like
Find Similar Products By Category:
Other Networking Devices
Hot Searches:
Inquiry Cart 0
Contact Us
Inquiry Cart
Back To Top